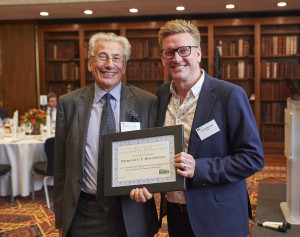 Former Secretary of the NOAH Code of Practice for the Promotion of Animal Medicines has been recognised for 22 years of service to the association, before his retirement this April.

Making the award at NOAH’s VIP lunch in London, NOAH Chair Jamie Brannan explained the importance of the Code and Desmond’s work: “NOAH promotes professional standards and best practice in the use of animal medicines in the UK and our Code acts as self regulation of standards of promotional activity: it is obligatory for all NOAH members.  It is not a substitute for the law, but ensures a higher standard, in addition to the law.

“It is overseen by a Code Committee which consists of industry members, independent vets, farmers and pet industry that considers disputes between companies about promotions.

“Desmond was appointed as Secretary to NOAH’s Code of Practice Committee in 1997. He attended 73 Committee meetings and processed 120 Cases.  There have been many changes to the Code during this time and some very complicated cases. He presented at many Code of Practice Seminars, providing training on compliance and attended numerous review meetings.

“He has always worked tirelessly for the Code of Practice Committee, retaining his sense of humour in what could be challenging discussions. Desmond’s outstanding services to our industry must be acknowledged.  He is highly respected by his peers both past and present and, of course, by the NOAH secretariat.  His work has assisted us in maintaining high promotional standards for veterinary medicines.

“The NOAH Board would like to publicly recognise Desmond’s contribution to our industry by presenting him with our ‘Special NOAH Award for Contribution to Animal Health’. I wish you all the very best for the future,” said Jamie.