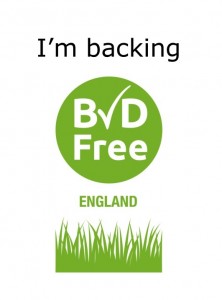 NOAH, along with 70 organisations from the veterinary profession, industry, science sector and government, is supporting the 2016 BVDFree campaign to eradicate bovine viral diarrhoea (BVD) from England. The campaign is raising awareness of BVD through a social media campaign (#BVDfree) and easy-to-remember techniques for farmers.

The BVD virus is endemic in cattle herds in England. It is a cause of animal health, welfare and economic losses on infected farms. Most – estimated at around 90% – herds will have been exposed to BVD: either infected with BVD virus or at constant risk of re-introduction of disease. BVDFree is the first national scheme in England to work towards eliminating the BVD virus from all cattle herds.

The BVD virus is transmitted in a number of ways, either through a congenital infection during pregnancy to the foetus, giving rise to a persistently infected animal, or between cattle within the herd, often spread from nose-to-mouth, and giving rise to a wide variety of clinical signs.

Donal Murphy, veterinary surgeon and NOAH’s head of Technical and Regulatory Affairs said: “NOAH is pleased to be a part of the BVDFree England campaign coalition, supporting vets and farmers as they work together towards the elimination of this disease. As well as its cattle welfare implications, BVD has been estimated to cost between £13 and £31 per affected cow – money our farmers can ill afford to lose.”

The campaign will work with cattle industries in Wales, Scotland Ireland and Northern Ireland to eradicate the disease from the islands of Britain and Ireland.

He said: “We echo the campaign’s statement of intent: we recognise BVD as one of the biggest disease issues facing the cattle industry currently and one which is in the hands of the sector to control and eradicate. We fully back the eradication of BVD from the national cattle herd.”

More information about the BVDFree scheme and how to register can be found on the website www.bvdfree.org.uk.