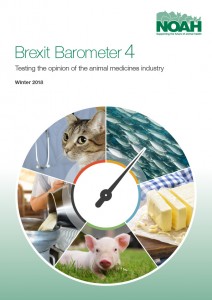 Despite a Brexit landscape that is changing day by day, NOAH’s fourth and final Brexit Barometer reveals that optimism amongst the animal medicines industry rose in comparison to previous Barometers. As the final months of negotiations offer yet more twists and turns, members and stakeholders outlined their key priorities whilst acknowledging that developments within Government continue to evolve.

Findings within the final edition of the Barometer were taken from NOAH’s ‘Brexit and Beyond’ Conference on 30 October, 150 days ahead of the Article 50 deadline, since when there have been several major developments in negotiations. On that day, members and stakeholders demonstrated a noticeably more optimistic perspective.

Sentiment was tracked across the same six lenses as the previous three Brexit Barometers: animal health and welfare, public health and food production, trade and investment, R&D and innovation, bringing new products to market and post-licensing controls for the overall market. Key findings include:

“As we head into 2019, despite a very challenging business environment, we are reassured that our members and stakeholders felt more optimistic than they were in our previous Barometers. However, this sentiment could change very rapidly depending on Government negotiations. We look ahead with optimism, but also with uncertainty. The future months will be some of the most challenging that we as an industry have faced and NOAH, as ever, remains dedicated to supporting our members and stakeholders through the Brexit process and beyond, towards a successful future for our sector.”

Keep an eye out for ‘Brexit Perspectives’ in 2019 where we will be continuing to listen and respond to our members’ and stakeholders’ thoughts, concerns and opinions on the topic areas that our Barometers have profiled over the past two years.