Safeguarding animal health and welfare: a priority for the future UK-EU relationship

Brussels, 23 May 2018; Yesterday evening (22nd May 2018) the ‘Safeguarding animal health and welfare: a priority for the future UK-EU relationship’ event took place at the European Parliament in Brussels. Members of the European Parliament and the animal health industry gathered to discuss the key issues that must be addressed to enable a continuous supply of animal medicines in the EU-27 and the UK post-Brexit.

Facilitated by AnimalhealthEurope in conjunction with UK industry body, NOAH (National Office of Animal Health), and Irish association, APHA (Animal and Plant Health Association), the event was co-hosted by MEPs Julie Girling and James Nicholson and was also attended by MEP Mairead McGuinness, Vice President of the European Parliament. The panel speakers each addressed what they saw to be the main priorities for safeguarding animal health and welfare after the UK leaves the EU.

Roxane Feller, AnimalhealthEurope, believes animal health should be in the centre of Brexit negotiations as sick animals lead to risk of transmissible diseases and will undermine food safety and therefore human health. Roxane drew attention to three key priorities that must be considered: (1) ensuring continued access to animal medicines; (2) maintaining the collaboration in the field of transboundary diseases; and (3) encouraging further innovation in the animal health sector by pursuing scientific cooperation.

John Keogh, APHA, explained that the continuation of dual labelling is absolutely critical if Irish vets, farmers and pet owners were to retain access to the full range of animal medicines for animal health and welfare. “If dual labelling of UK with any EU Member State cannot continue, instantly the current 70% of Irish products that are dual labelled can no longer be sold in Ireland,” he said. John acknowledged the need for every animal medicine supplied to any EU market to comply with all of the applicable EU regulations and affirmed that he was not seeking to change this, but instead to find a solution that allows dual labelling post-Brexit.

Dawn Howard, NOAH, warned the impact that Exit from the EU will be not just on the UK medicines supply, but on many other Member States such as Ireland. 70% of NOAH’s members have UK manufacturing or use UK contract manufacturers, which in some cases supply not just the EU, but a global market. Relocating manufacturing to the EU-27 by 30 March 2019 will prove incredibly difficult, leading to interruption of supply. Being able to make all changes to packaging by that date is highly unlikely too. “This means that perfectly safe medicines will go to waste, supply will be interrupted and animals cannot be treated,” she said.

George Tice, AnimalhealthEurope, gave specific company examples of how despite significant investment in supply chain restructuring and relabelling it will not be possible to complete the total transition process by 30 March  2019. “This will result in a significant interruption in the provision of medicines for animals in the EU-27 – an interruption that will be felt predominantly by the vets, farmers and pet owners in Europe that rely on the availability of these products” he said. The request that George made for an extended transition period to allow supply chains to empty themselves of product that was compliant before 31 March 2019 is one that is echoed industry wide.

MEP Julie Girling reinforced her support for the issues raised, in particular dual labelling, and emphasised the need for a base political deal on Brexit to be put in place very soon without which the repercussions could be vast. She affirmed that the base deal must originate from the UK.

MEPs Mairead McGuinness and James Nicholson concluded that for animal health to break through the barrier amongst all of the other political issues surrounding Brexit, detail, clarity and total collaboration are required.

Roxane Feller summarised the key takeout from the evening: “Animal diseases do not recognise borders. Our ultimate goal is to ensure continuity of animal medicines availability for all veterinarians, farmers and pet owners throughout Europe to safeguard animal health and welfare. For that, workable solutions need to be put in place to ensure minimum disruption to product development and approval and to maintain authorisations. It is especially important that veterinary products that are legally released on the market before 29 March 2019 remain available after the UK departure. We hope the European Parliament will support us in the negotiation.” 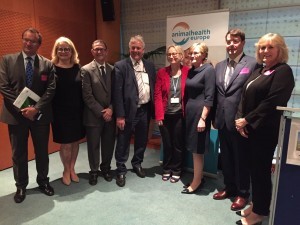 AnimalhealthEurope represents manufacturers of animal medicines, vaccines and other animal health products in Europe. It represents innovators and generics alike, as well as large, medium-sized and small companies. AnimalhealthEurope promotes a single market in animal medicines across the EU, ensuring the availability of medicines to protect the health and welfare of animals. For further information, please visit: www.animalhealtheurope.eu

NOAH represents the UK animal medicines industry. Its aim is to promote the benefits of safe, effective, quality medicines for the health and welfare of all animals. For further information, please visit: www.noah.co.uk