Code of Practice for the Promotion of Animal Medicines

As with any industry, marketing animal health products is a key factor in spreading information about their use, as well as promoting sales. All advertising is subject to the rules of the Advertising Standards Authority, but as with human pharmaceuticals animal medicines promotions are regulated. There are special requirements in the Veterinary Medicines Regulations, and an additional industry Code of Practice which is obligatory on all NOAH members and has also been endorsed by several non-member companies.

The Code of Practice was established as a form of self-regulation by the animal health industry in matters relating to product promotion. The Code of Practice Committee is actually older than NOAH itself, dating back to 1974 when NOAH was the Animal Health Register of Association of the British Pharmaceutical Industry and the code was called the Veterinary Code of Practice. 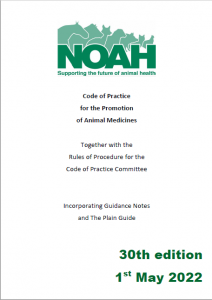 Some of the changes of note between the 29th edition (revised) and 30th edition include the following:

Code of Practice Complaints and Responses

The following templates have been developed to assist companies in the preparation of Code of Practice complaints.

Complaints should be submitted using the CODE OF PRACTICE COMPLAINT FORM which is available online or from noah@noah.co.uk: when completed they should be emailed to noah@noah.co.uk addressed to the Secretary of the Code of Practice Committee.

We have also provided a CODE OF PRACTICE RESPONDENT FORM template.  The Code of Practice Secretary, Nockolds Solicitors, will forward the ‘response’ template directly to the respondent, once all the relevant sections of the complaint have been received and considered.